Old Street – putting the genie back in the bottle?

Old Street Roundabout is a heady intersection of urban movement flows: on foot, on cycles and in vehicles, including the Tube. But it is currently a mess, out of place within the surrounding network of generally convivial streets. In order to appreciate the severely negative condition of the place you only have to walk to Old Street Roundabout from a few hundred metres in any direction to witness the sudden, dramatic degradation of public space, the increase in traffic speeds and the disappearance of pedestrians into subways.

Yet, as a nexus of movement, the Old Street junction has the urban design foundations – the DNA of urbanism – to be a great public space, serving the local area as well as acting as a global emblem of Tech City. Not a valley, glen or vale but a truly urban object: a forum, a plaza, a piazza, a market place a square: Old Street Square. Or even, in keeping with the open source/open access aspirations of many in the technology community: Old Street Commons. For this to happen, the public realm of the Old Street junction needs to be overhauled. Radically.

The Prime Minister’s announcement of a £50 million investment in the regeneration of Old Street, made jointly with the Mayor of London at today’s Urban Age Electric City conference, creates a unique opportunity to replace the current mess with public space of the highest quality; to open up the large area of labyrinthine space that Old Street occupies and make it accessible for people to walk and cycle to, to sit down in and chat, to introduce one to another, to share ideas and create new ones, to meet, greet and innovate. In other words to create an open, accessible node in the movement network of London and, in doing so, to continue London’s tradition of street-based, public interaction. 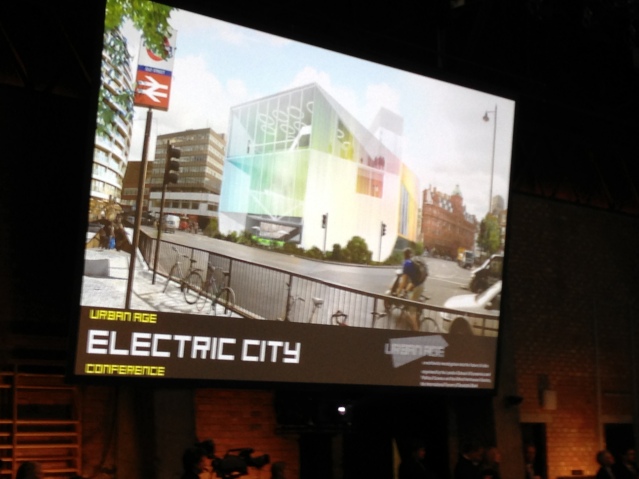 However, from the image of a transformed Old Street presented at today’s conference – and this is putting it kindly – the opportunity to be truly civic appears to have been ignored, abandoned or not even recognised by those in charge. To show a building sitting in the heart of the space, even a building to house meetings and events that will benefit innovation, but not to show any changes to the miserable spread of tarmac and wall of steel guardrailing, is a remarkable and regrettable shortcoming.

The image unveiled is an old image and the architects, 00, are no doubt disappointed that it, of all depictions, was selected. Nevertheless, the very act of placing a major building into an open space is a provocative proposal that needs careful scrutiny. Would it be deemed acceptable to do the same in Trafalgar Square, Leicester Square or Parliament Square? In the Piazza Navona or the Place Vendôme? Of course not. So why in Old Street? Perhaps the answer lies in the fact that Old Street is deemed to be a failed space, not worthy of a continued existence. Yet before any miserable square metre of Old Street is removed and replaced with a shiny new building, the question needs to be asked: how could the space of Old Street be improved? How could it turn from dingy grey subways and black tarmac to a a place paved with gold, filled with the very serendipitous interactions that the Mayor announced as being the objective of the exercise? How could true value be created in a public space that creates an urban buzz and drives the knowledge economy of the creative class?

Cities around the world are transforming their car-centric, carboniferous streets and spaces into great places for people; places that add to the creative economies that thrive in and around these transformations. Why not London?

Conference director Ricky Burdett suggested that help could be provided to improve the designs revealed this morning. He is right, but the help is not necessarily needed with the architectural look of the building. The real effort needs to be directed towards the idea of a building at all. A way forward will be to review the brief for the £50 million investment in Old Street. This brief should not presume the construction of a new building inside the roundabout. There are many existing buildings and building sites where meeting spaces and conference facilities can be provided, and already are: those of us at the conference, hearing the Prime Minister and Mayor’s joint announcement and applauding Burdett’s response, were sitting in one.

Old Street does not need a building inside a roundabout, a Donatello parmi les fauves. It needs a space; a truly public, open and accessible great place. This must be the test of whichever scheme is built.

3 Comments on “Old Street – putting the genie back in the bottle?”