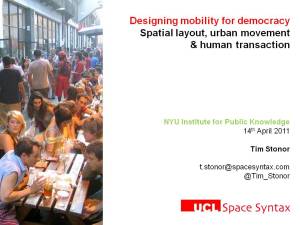 Summary
Given the title of this event: “Designing mobility”, I want to turn to the subject of design and the role of architects. The key message of this presentation is that cities need architects, not only to design the buildings that fit into them but also for the networks of space that connect them together. Why? Because architects have a special skill: to resolve complex problems into elegant solutions. And the spatial network of the city is a complex design problem.

However, before they can really help, architects need to “get” cities. The problem for cities is that architects are not sufficiently familiar with the way cities work and therefore the design principles they need to work with to make cities more effective as places of human transaction.

So what is the role of a city?

A city should act in three key ways:

1. as a spatial layout – of routes (streets and paths) and of land use assets

2. as a movement machine, organised by the configuration of the route network and the attraction of the land uses assets

3. as a transaction engine, generating and accommodating social, economic and cultural exchange.

A city is therefore a place of production and reproduction.

When cities don’t work a whole series of assumptions are typically loosed into the policy framework. Perhaps the greatest and most damaging of these is that that they lack transport infrastructure. Witness Sydney’s aerial people mover or the radical and crude plumbing of highway arteries into the capillary network of historic cities, especially here in the US. 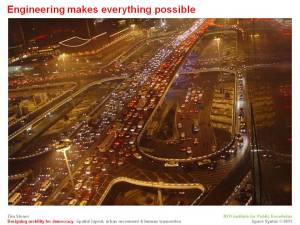 Often the last thing that troubled places need is more transport infrastructure, especially when it is about moving people large distances. Engineering shows us that we can move human beings in pretty much any way we please, whether it’s to the moon or into the hearts of historic places, like here in Beijing.

As Sartre remarked, “Everything has been figured out, except how to live.”

Heroically engineered mobility in the form of great road intersections such as that in Beijing is – with notable exceptions – the default response of the global transportation community and therefore of the political system. Witness the federal response to the current economic recession and the bent towards building and fixing highways.

So let me start by setting out the problem. Unlike their planning cousins, architects are largely un-analytic when it comes to the functional properties of the city. The focus of designers has been, and largely remains, on the visual appearance of cities – the materiality of the surface of the building – at the expense of the functional performance of cities these buildings serve.

Why should this be? The persistence of 19th Century taxonomies may have much to do with it, creating professional divisions of convenience with the restriction of knowledge and snobbery that follows.

For whatever reason, functional performance is not rated in architecture as worthy of high design. It is therefore not the domain of the architect but of the engineer. Which is why, when it comes to cities, this means the traffic engineer.

There are, I think, two possible consequences for this position.

First, that architects design themselves out of importance. I hope this is not the case because architects have something important to offer – the ability to creatively resolve complex problems into elegant solutions. This skill is not held exclusively by architects but it is found in especially high levels among architects. 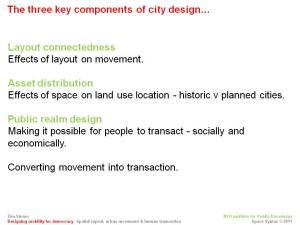 So what are the design components that architects should be engaged in?

Effects of layout on movement.

Making it possible for people to transact – socially and economically.

This is where architects come in. My colleagues and I at Space Syntax have spent many years developing a set of design rules based on careful analysis of how cities work and how their patterns of use are affected by the way they are designed.

The key thing is to avoid the perils of taxonomy by focusing on space on space. Let me try and summarise 40 years of research in 10 slides… 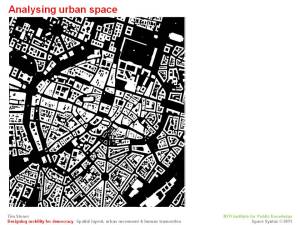 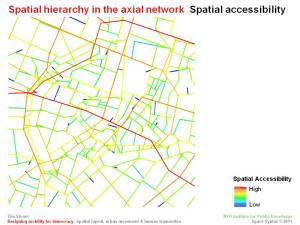 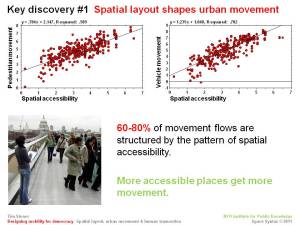 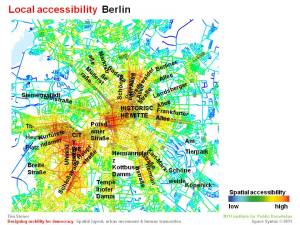 This process of practice-based research has led us to five key design principles for cities:

1. buildings need to face the street – this is mostly understood although there is still a fear of the street as a loud and smelly thing.

This is a 19th Century attitude that pervades design thinking. 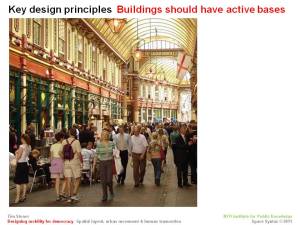 2. buildings need active bases – this is not fully understood. There is still a belief that the roofline is everything. Buildings need as engaging a “streetline” or “baseline” as they do a “skyline”.

Even when it isn’t, when it is exploratory, light doesn’t bend around corners – not sufficiently anyway. Linearity is a prerequisite of search.

4. urban areas need critical mass not isolation – neighbourhoods need to be contiguous and continuously connected, not isolated and fragmented. This is hardly discussed but we should have learned this through the failure of the UK public housing programmes of the 1960s, 1970s and 1980s, where housing estates turned inwards, away from each other and away from the street. In those days the streets were the barriers. Today, if it isn’t the street it is likely to be a park – landscape urbanism, at least one common form of it, threatens the transactive capacity of cities by separating urbanism into small, isolated fragments.

The oft-spoken defence of “I want the route to unfold so that people get surprises at every turn of every corner” is frankly nonsense. It’s a recipe for fearful urbanity and sterile shopping centres. There is more sublime poetry in one block of lively linearity than in an acre of convoluted labyrinth.

Because the difference is people.

5. you should not only be able to see a destination but also the way to reach the destination – most notably when changing levels in urban space or in a building – I might be able to see the attractor, whatever it is, but can I see my route to it.

When these five conditions are achieved, the result is a system of everywhere to everywhere relations, creating structured contact between local inhabitants and visitors/passers by. These local-to-global relations, structured through patterns of centrality are the building blocks of the transactive city. They need to be understood and designed in.

The city should, in this way, become an enhanced “transactive environment”. 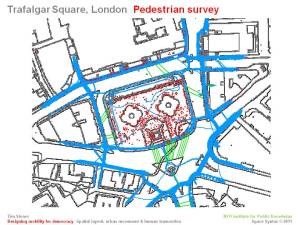 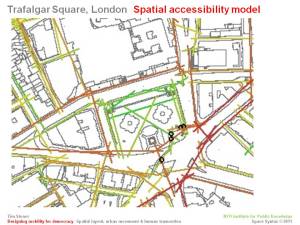 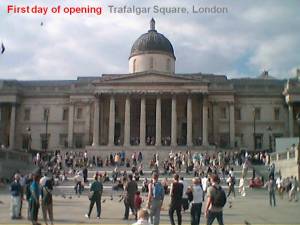 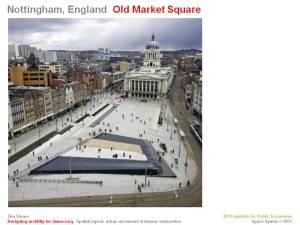 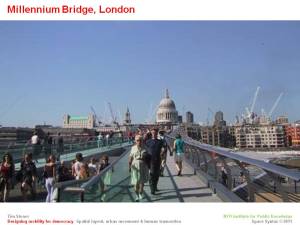 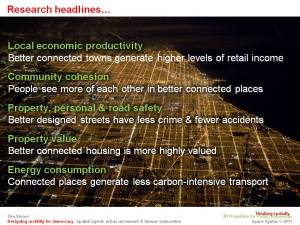 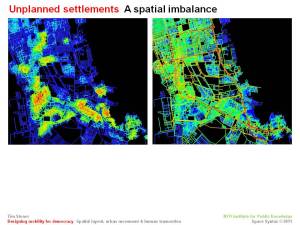 These design rules facilitate mobility because they enhance motility.

While I have focused on the architects role at the scale of the building and the street the are, in closing, two other areas that are worth mentioning.

First, at the scale of the entire urban system – whether village, town, city or urban region. Design is fractal. Movement is fractal and the principles are scalable. This is relevant both to the retrofitting of existing cities (Jeddah, Berlin) and the creation of new urban areas.

Second, in the realms of “online”. Having just devoted a good part of my time at Harvard to an investigation of the mores and trends of the digital environment, I’m struck at the similarity of thinking in terms of both the infrastructure of the “online” and “onland” environments: systems, networks, connectivity, capacity but also the deeper issues of search and human interaction.

The role of the city has long been to enable and stage events, often created through serendipitous face-to face contact. The city of today and the digitally enabled city of the future will be to do more of the same. Indeed, once we start to feel the city when we are online, the city will have achieved an evolutionary transformation. The online aspect of “city” – the digitalopolis – is emerging as we make sense of living and transacting online.

Which is why the city, be it online or onland, needs careful design of its three key patterns: its spatial layout patterns, its urban movement patterns and, ultimately, its patterns of human transaction. 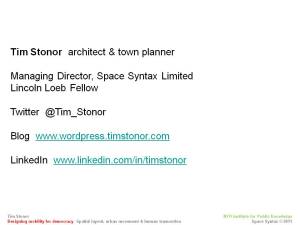 ← Ed Glaeser at the American Planning Association
The aesthetics of performance →